Eggy and Bo started as an Inktober experiment; I knew I wanted to do an ink drawing every day for October, and I wanted to limit my materials: a toned sketchbook or illustration board, fountain pen and Artgraf soluble graphites, maybe some colored pencils.  I deliberately did not plan in advance but wanted the drawing style to be spontaneous; no thumbnails or underdrawings, simply sitting down and creating the images directly on the paper or board. It started with sepia tones and historic photos as reference. The story grew slowly but daily from there. It was sporadic and rather like hearing snippets of a conversation, so it’s incomplete, sometimes repetitive, with unexplained time gaps. Follow the images down and the story bits will fall out like linty pocket treasures.

Here’s the first drawing in the sequence; text for each picture is below it:

We all think we’re the first, best, most important ones to come along, until (and unless) we get knocked around by life experiences and learn some humility.

The lamp posts seem to lead to other places and times, though I’m not sure when or where or how.

If you feel like you’re lost, look around. Look for a friendly dog. Ask for help. And keep your friends close.

Warmth, comfort, and a friend. Simple.

So what makes a place feel safe? Like home? Where can you be yourself?

A highland sheep wonders what we’re doing at the ruins of Invergarry. Will you go through the portal?

Before going up the bridge to the gate, there are rocks to be skipped… 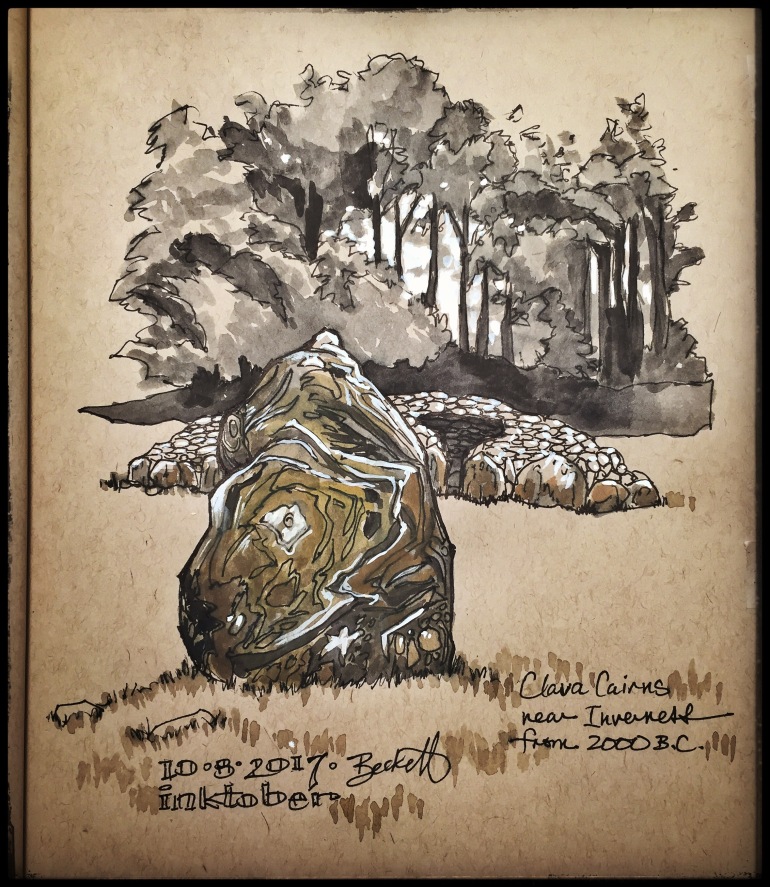 Standing Stone at the Clava Cairns, near Inverness, Scotland. The cairns date from 2000 b.c. Do you head inside the cairn tunnel first, or head for the trees?

It’s easier to go new places when you have a friend along. 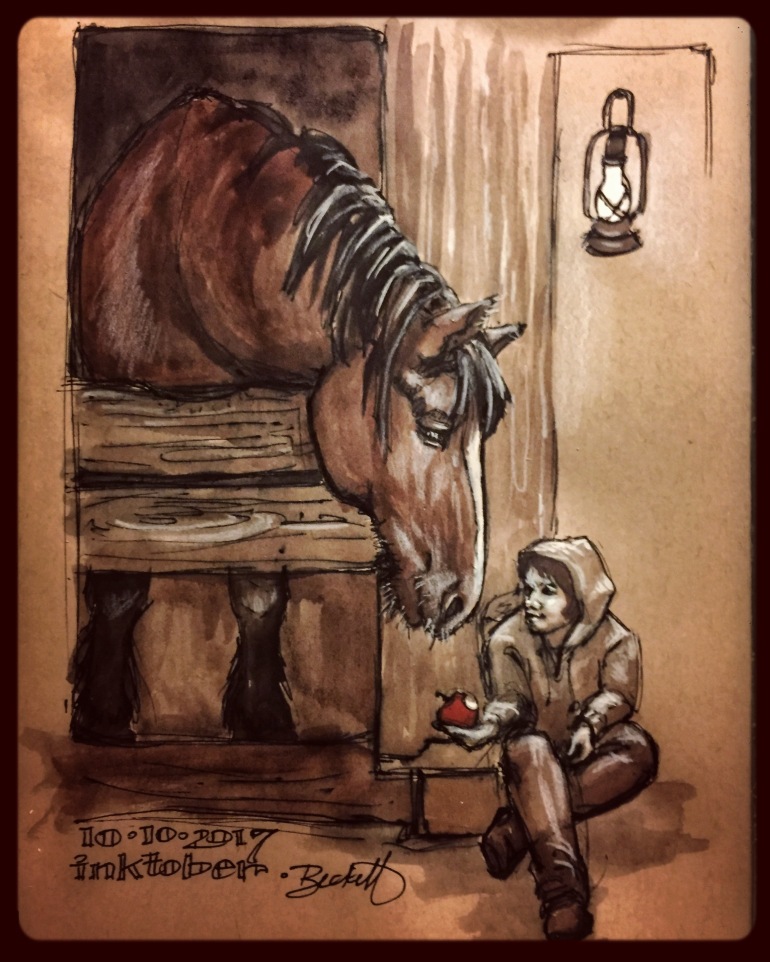 A cat in a window, even in scary times, can be a reminder that the ordinary can be a precious thing.

I don’t think I want to go inside, but it must be all right out here; there are mice.

Walking toward the trees. 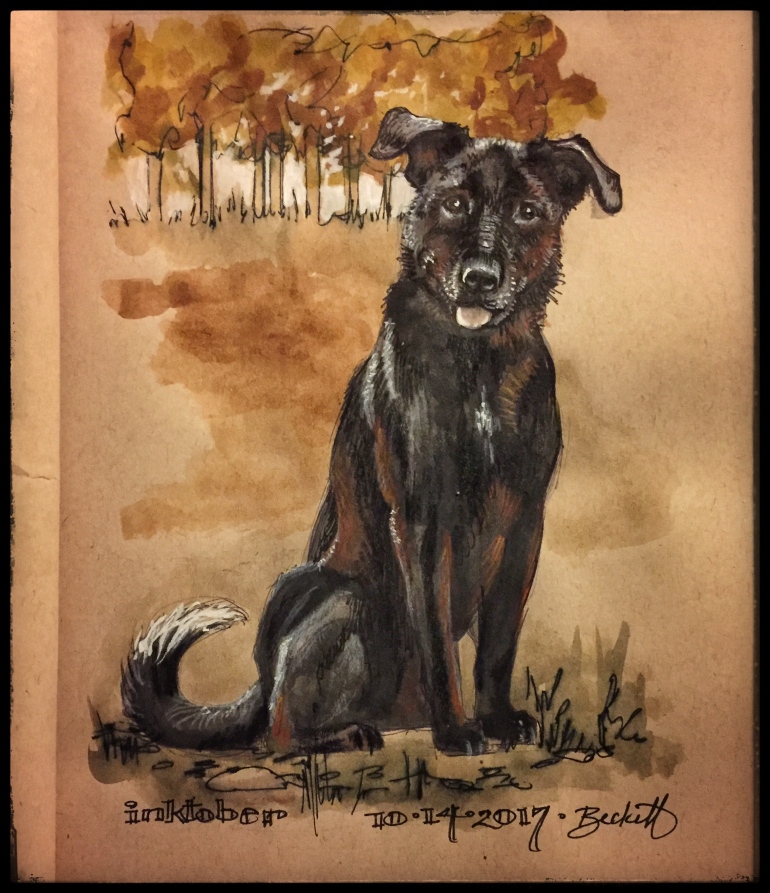 The first time Eggy and Bo met the Captain, he was waiting for them on the way to the trees. He’d been waiting a long time. 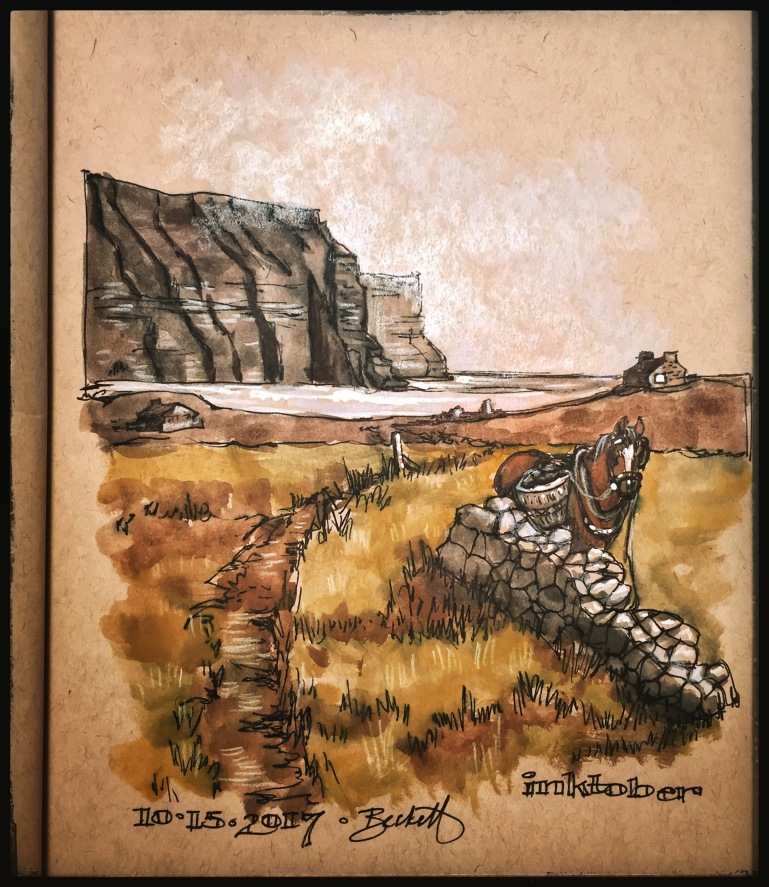 Eggy first came across Bo in an empty field, and nobody was home anywhere around. Bo was lonely and hungry and kind of scared, and he couldn’t tell Eggy much, so they went on together. 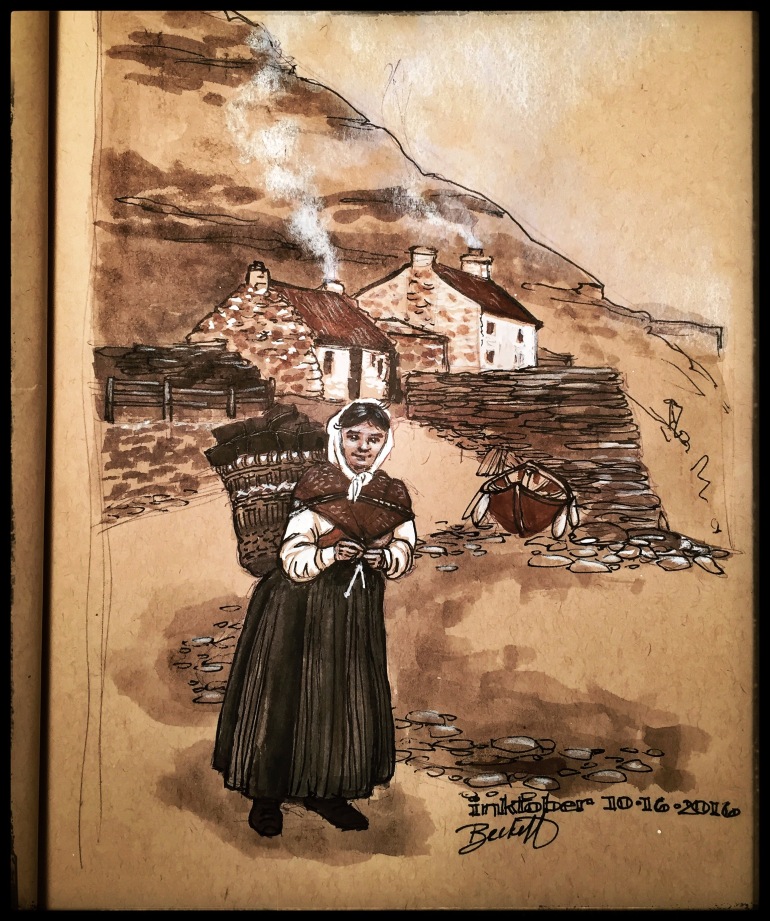 The Captain led Eggy and Bo on a very long walk to Mrs. T.  Eggy and Bo didn’t know her, but she smiled when she saw them and gave them food and warm places to sleep. 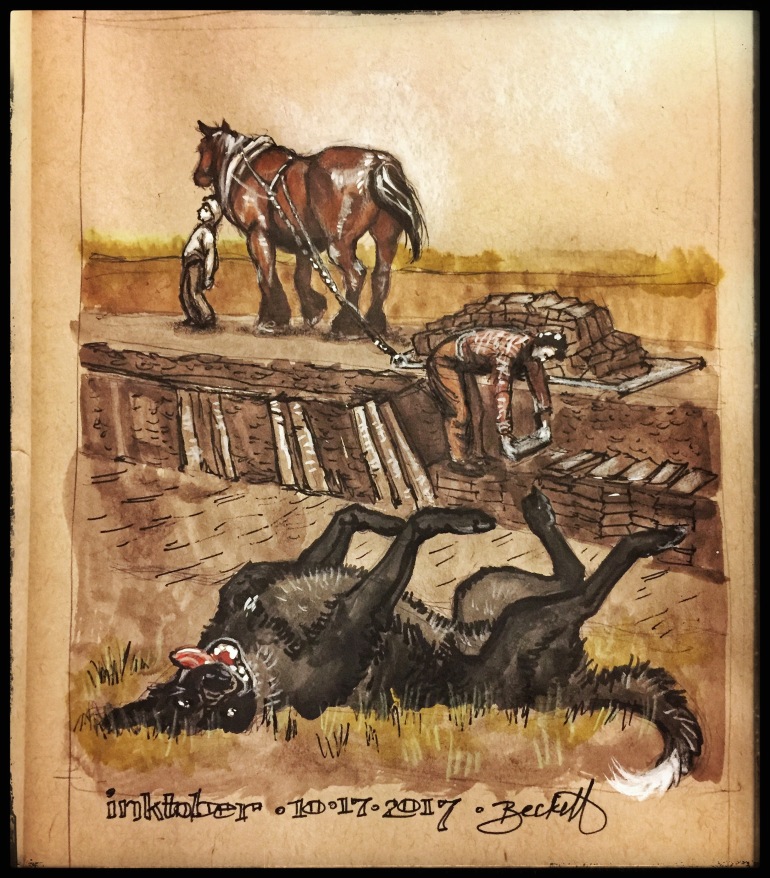 Eggy, Bo and the Captain walked by and heard “Horse like that doesn’t belong to some raggedy kid”. The Captain growled, one of the men moved as if to grab at them, and they ran and ran.

Eggy, Bo and the Captain ran from people until everything around them changed and they couldn’t run anymore. Bo was limping and they were hungry and thirsty. It was getting dark, but Eggy feared people more than the dark, so they kept going.

Bo, limping in pain, found a friendly cow in a dark, quiet field. Eggy struggled to get Bo’s tack off and curled up to sleep, knowing they had to find help for Bo from grownups. The Captain kept watch, and as Eggy slept, tiny lights flickered all around them.

Eggy, the Captain and Bo found their way to a village blacksmith. He saw them, smiled and then frowned as they walked closer. Eggy stopped first, well out of reach. Bo snorted and walked right up to the man, touching noses with the mare he held. The man patted his neck and ran a hand down his sore leg.

The blacksmith told Eggy that Bo needed a new shoe and to rest his sore leg for a few days. He went on and said that they could stay and help out to pay their way, and Eggy nodded even though it was hard to leave Bo at all.

The blacksmith carefully put red-hot shoes on Bo as Eggy whispered that it would be all right over and over. The Captain watched carefully from a distance. The blacksmith noticed Eggy’s clothes but didn’t say anything except that they were welcome to stay if they could find ways to help out around the place. Eggy nodded, the Captain barked and wagged, and Bo snorted and tried to stamp his foot because he didn’t like getting shoes.

Mrs. A., the blacksmith’s kind and curious neighbor, made a hot bath for Eggy. She laid out clean hand-me-down clothes like a question mark. The hot bath felt great, but Eggy was nervous that someone would come in. When the water was cold, Eggy dried off, looked at the clothes and chose the shirt and pants, then put on the old hoodie again over them.

The Captain missed Mrs. T., and her stews and warm fire. Bo’s foot was still healing, so Eggy decided to use the light trick they had used before to go and visit Mrs. T. The Captain was eager and happy, and Eggy was only a little nervous about it. When they got there things felt different; everything was cold and dark and lonely, and nobody was around. It looked like there hadn’t been anyone there in a very long time. Eggy felt fear and cold swirling around them, and the Captain whimpered.

Eggy and the Captain tried another light, then another. Each time they ended up in a new place they didn’t know. Shaking and cold, they decided to try one more time, holding Bo in their thoughts harder than ever, and hoping the light would take them back to their friend.

Eggy and the Captain traveled on so many lights they lost count, and they seemed to be jumping through places and times with no pattern that Eggy could see. They began to really fear they wouldn’t be able to find their way back to Bo and the blacksmith. What was the secret to controlling where they went with the light travel?

Eggy and the Captain had made so many jumps on lights they lost track of where they were. The Captain met a tabby cat in a field on a jump, and knew they were supposed to stay together. The cat declined to give a name, but agreed to join them on their journey. They seemed friendly and interesting, and they smelled rather like fish.

Eggy and the Captain followed the Cat down alleys and through dark tunnels until they lost track of where they were and where they had been. They turned a corner and a horse with a cart and driver pulled up short in front of them. The horse whickered at them in surprise and the man on the wagon stood up and shouted happily at them; it was Bo and the blacksmith. The Cat jumped up onto the wagon, washed a paw and was ready to ride, but the Captain ran past the wagon to the woman who was walking alongside, and it was Mrs. T., who had been chatting with the blacksmith while running errands in town. She and the Captain were overjoyed to find each other again, the Captain jumping and licking and barking, leaping between Bo and Mrs. T.  Eggy simply stood still, watching it all until the blacksmith jumped off the wagon grabbed Eggy in a big hug and twirled around and put Eggy up on Bo’s back. The rest of them all climbed up in the wagon, and Bo pulled the wagon back towards the village where the blacksmith lived.